Nearly full intact, the Garnier Public Garden in Provins city centre attests to the artistry of 19th-century gardens and a taste for exotic species: purple beech, catalpa trees and royal ginkgo harmoniously coexist here next to hazels and yew trees.

Pause to take in the garden’s beauty and relax before continuing your visit!
Perhaps you’ll spot the swans, which are emblematic of Provinois…

The founder of this garden is Victor Garnier.
Having made a fortune in Paris, he retired here in his native town of Provins in 1848 where he acquired a parcel of land. Here, on his estate, he built a landscape garden that he opened to the public. Upon Mr Garnier’s death, with no heirs in his will, he bequeathed the garden to the city to make it into a public park. His house became the municipal library, which still houses Rare Books and Special Collections, as well as the archives of the city of Provins).

Vestiges of Provins’ bygone landmarks accentuate the garden’s romantic features. Its statues of the city’s great residents from times past make this garden a living memory. 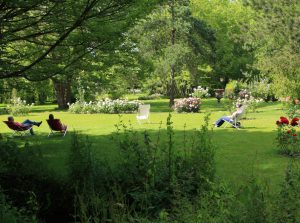 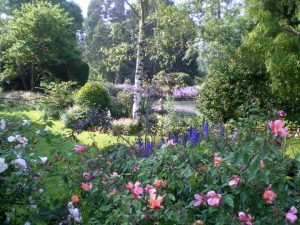