The church of the Benedictine priory of Saint-Loup-de-Naud, one of the rarest and most beautiful Romanesque buildings in the Ile-de-France and close to Provins, remarkably preserved!

Located eight kilometres from Provins, the church of the Benedictine priory of Saint-Loup-de-Naud is one of the few well-preserved Roman buildings in the Ile de France, but above all one of the most beautiful!

This church, whose apse, transept surmounted by a square bell tower, and first two bays are in pure Roman style, owes its fame to its portal sumptuously sculpted with columnar statues: representation of Saint Wolf on the trumeau and his miracles on the arches dominating it, Saint Peter, Saint Paul, Saint Mark, Saint John, the Virgin surrounded by the apostles on the lintel, Christ seated in a mandorla on the tympanum, etc.

Completely restored since 2017, it is one of the most complete works of early Gothic sculpture that has come down to us.

Built into the half-built porch, as shown by the Countess de Maillé, it probably comes from Burgundian workshops influenced by the royal portal in Chartres.

To enter the church and discover its other wonders, simply turn the ring.

The chevet, transept and the first two bays of the nave date from the 11th century.

The wall paintings in the choir and apse date from 1867. They replace much older paintings which have now been destroyed, but which have fortunately been recorded (visible in the slide show on this page and on panels available in the church).
Only the representation of Saint Savinien, located in the choir on the right, dates from the 12th century.

After this beautiful visit, don’t hesitate to take a walk in the village, classified since June 2020 as a “Village de Caractère“, a French national quality label!

We also suggest you go on a hike, “Discovering Saint-Loup-de-Naud“, labelled by the Fédération Française de Randonnée (French Hiking Federation), which is 12km long and of medium difficulty.

Information and welcome conditions subject to change and to the evolution of sanitary conditions in force.
Schedules:
• Daily from 8 a.m. to 6 p.m. during high season.
• Until nightfall in winter. 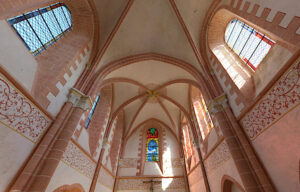 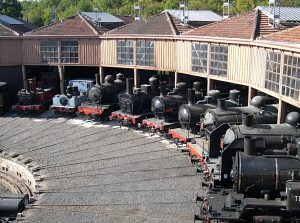