Great novelty in Provins!
Discover the thousand-year-old historical site of the Saint-Ayoul Priory, thanks to an audio-guided visit!

15 years is the time it took to restore the Priory Saint-Ayoul, acquired by the town of Provins in 2003.
It is located in the centre of Provins, next to the church of the same name.

Building, fire, rebuilding, demolition, restoration, the Saint-Ayoul Priory has known several lives and a history worthy of the greatest novels!

The origins of this architectural ensemble date back to 996…

It all began with the discovery of relics attributed to Saint Ayoul. They were immediately put under cover and preserved in the crypt of the Saint-Médard chapel, built for this purpose.
Bringing to light the remains of a saint or martyr was at that very religious time, an immense event and synonymous of consequent pilgrimage.

Indeed, in the middle of the 11th century, Count Thibaut I of Champagne decided to reform the place. The chapel became too small to accommodate the increasing number of pilgrims who came to pray.
It gave way to a more extensive project: a parish church and a priory of the Benedictines, religious of the Order of Saint Benedict.
The church was built according to a particularly ambitious plan, with a nave with aisles, a vast transept, and an ambulatory choir with several radiating chapels.

Over the centuries, the whole has been constantly reworked: destruction, rebuilding, extensions, etc. (see the complete history at the end of the page (only in French).

The year 1527 marked a turning point following an ancient conflict between the two religious communities, parish and priory: the monument was definitively separated into two distinct parts. The nave and the aisles were attributed to the parish, while the chevet remained to the priory. A wall was built between the two parts.

Sold as a national property at the end of the 18th century, it was used by the sub-prefecture, the national gendarmerie, the Cavalry (imagine the chevet transformed into a barn for horse fodder), and the army.
Part of it was even bought back by private individuals who transformed it into a dwelling and outbuilding, and demolished chapels to erect walls to separate the properties.

From 1938, the chevet was retroceded by the War Ministry to the Fine Arts Department.

Afterwards, came the first works and first acknowledgments of the monument. The main modern openings were closed and some old bays were reopened. It was the beginning of archaeological excavations, studies, and consolidation work.

Since 2003, therefore, efforts have never stopped. They consisted in excavations and discoveries, classification as a Historic Monument, rehabilitation and restoration.

The result is sublime and captivating. Magnificent frescoes and painted plaster have been revealed at the transept crossing and on the walls, proof that the religious buildings used to be coloured and decorated with motifs of religious symbols.

An architecture out of the ordinary

The entrance is through the porch on the right side of the Saint-Ayoul church, more precisely at n°1 de la cour des Bénédictins.

• What is the difference between a parish church and a Benedictine priory?
The parish church is a place of cult, assigned to a parish priest, under the authority of the Bishop. The Benedictine priory as mentioned above is governed by the rule of St. Benedict. Rather strict, it obeys its own regulations. The priory is a real place of life, reserved for religious men and women where they can sleep, eat, exchange, and above all pray.

• It is said that the Fairs of Champagne started thanks to the pilgrimage.
Such a large crowd necessarily has needs (food and other goods). It was not uncommon, and still today, to see merchants setting up their stalls. This configuration would have given the Counts of Provins the idea of creating large commercial gatherings twice a year: in May in the upper town around the Place du Châtel, and in November in the lower town, in the Saint-Ayoul district.

• The chapter hall was the main place of life: reading of a chapter of the Rule of St Benedict every morning, deliberation of temporal affairs, distribution of the daily tasks, reading of news from other abbeys, election of abbots, public confession of faults between monks.
Not all of them had the privilege of taking part in the discussions or of intervening, but all of them attended.

• A space dedicated to our Chinese twin city Pingyao
In 2005, the city of Pingyao in China and the city of Provins, two medieval cities listed as UNESCO World Heritage Sites, decided to become sister city. This aims to strengthen understanding and friendship between peoples and to consolidate and develop friendly ties between the two cities. « Tourism and Heritage Spaces » have been inaugurated in each of the two cities, for a dynamic reciprocity.
This space was inaugurated in 2016, in the presence of the Chinese authorities.

• Saturday 14 May at 8.30 p.m. and Sunday 15 May at 4 p.m.: “Concerts by Jean-François Zygel”: discover or rediscover this talented pianist, composer and improviser, as part of the 20th anniversary of Provins’ inscription on the World Heritage List!
Please note that the Priory will only be open from 10 a.m. to 12.30 p.m. on these two days.

Complete programme available in the Agenda

Prices:
Included in the Pass Provins or Family Pass
Ticket for the monument only: adult 4,30 € – child (4-12 year old) 2,80 € – free for 4 of age and under.
The monument will be free of charge from 1 to 30 April 2022, during the period of the photography exhibition “Provins, a Heart Story” by Jean-François Bénard, celebrating the 20th anniversary of the inscription of the medieval town on the World Heritage List!

Length: about 45 min.
Last admission 15 min. before the closure of the monument.
Audio-guided visit: in exhange for identity papers.

Please note that animal friends are not allowed in the monuments, nor on the sites of the shows, nor in the major events.

Buy your tickets onsite or online

The visit of the Saint-Ayoul Priory is included in the Pass Provins and the Family Pass.
But you can buy the ticket for the monument only, onsite at the entrance or online.
Once the date has been chosen, the 10.00 a.m. or 2.00 p.m. times (according to the season) that appear simply correspond to the opening time of the monument.
Your ticket is valid for the whole day or half-day.

All the Museums of Provins and its region! 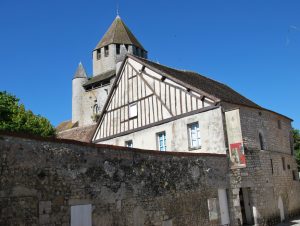 The medieval village of Donnemarie-Dontilly ! 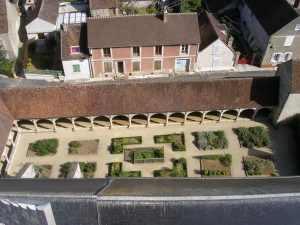