On the ancient lands of the Earls of Champagne, from the Year 1000, Provins is located on the crossroads of the European trade roads.

Gradually, the town becomes a very significant trade market. During the 12th and 13th centuries, Provins is at the height of its fame thanks to the famous Trade Fairs of Champagne.

Thus, Provins was inscribed on the UNESCO’s World Heritage List since the 13th December 2001.

The urban structure is organised to accommodate the great number of wholesalers: the wide streets for the transfer of goods and for the stalls, the three level merchant’s houses with sumptuous vaulted low rooms…
You will discover a beautiful example of this by visiting the Tithe Barn, rented at the time to Toulouse merchants.

The presence of water (Durteint and Voulzie rivers) favours also the economic activities and the expansion of many trades such as the woollen cloth manufacturer, the parchment maker, butcher, etc.

The impressive fortified wall was built during the 13th century and extended for 5 km (today 2 km), and it offers a catalogue of military architecture. Those ramparts protected the inhabitants and the tradespeople, and showed off the power of the Earls of Champagne.

Eight centuries later, the urban ensemble bears witness to its medieval history that stretched from 11th through to the 13th centuries.
The town’s architectural heritage is a supreme illustration of the emergence of commerce in early Western European history which is intimately linked to the growth of trade and cultural exchanges throughout Europe.

Thus, Provins was inscribed on the UNESCO’s World Heritage List since the 13th December 2001.

• From 19 March to 14 December 2022: discover exceptional festivities as part of the 20th anniversary of the inscription of Provins on the World Heritage List: concerts, shows, fireworks and night events, street art, conferences and exhibitions, special openings, etc.

See events with the label in the “Agenda“ 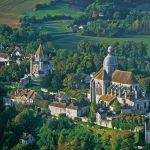